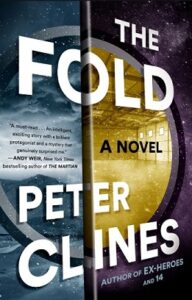 (review of the audiobook)

This sci-fi tale chronicles the journey of Mike, a high-school teacher, who has a very rare and unique ability to remember EVERYTHING that he sees and hear with exact recall. And he can flip through his memories at will. He’s sort of a human super-computer. Mike is approached by a friend, who works in special projects with the DoD, to assist the government on a new technology that is being developed: the ability to fold space and make near-instantaneous travel between any two points in space. Think StarGate or Star Trek’s teleportation machine.

I had a hard time believing that Mike, with his extraordinary ability, would have ever decided to remain a high school teacher, but I was willing to make the leap of logic. Of course, the special DoD project goes awry and it’s up to Mike and his amazing ability to try and save the world (or worlds).

A few things bugged me (pun intended) about how the author describes Mike’s ability. He uses a metaphor of ants marching through Mike’s brain showing him images of whatever memory Mike needs to recall at that moment. It’s fine to use the metaphor a few times, but using it incessantly gets annoying. Also, describing how Mike has a habit of pausing a few seconds before making a response just got silly and pointless (unless there was some deeper hidden meaning that I missed, oh well).

The ending got really kooky and far too-much-over-the-top for me to take it seriously. Which was disappointing because, up to that point, the novel was very captivating.

The narrator has done Peter Clines’ books before and again does a very good job.